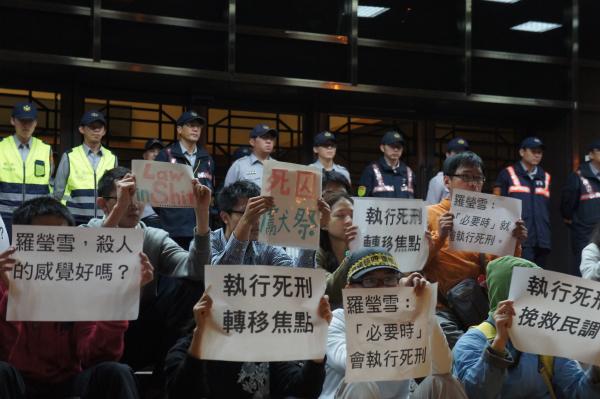 When a Trigger-Happy Government Willfully Uses Violence to Threaten Its People, How Can They Ask the People to Renounce Violence?

The Taiwan Alliance to End the Death Penalty, the Taiwan Association for Human Rights, the Judicial Reform Foundation, and the Taiwan Association for Innocence today (April 29, 2014) held a press conference in front of the Ministry of Justice, in condemnation of the government decision to carry out the death penalty at a time when people all around the country have risen up in protest of its preposterous policies, and when its approval ratings are at its lowest ever in Taiwanese history. By using the death penalty as a desperate means to salvage public approval, this government has shown to the world once and for all its savage and callous nature.

According to media reports around 19:00 this evening, those condemned to die today include Deng Guo-liang in Taipei, Liu Yen-guo in Taichung, the brothers Du Ming-lang and Du Ming-xiong in Tainan, and Dai Wen-qing in Hualien. Of these five, the Du brothers were originally declared innocent in the court of first instance, and are widely believed to have been wrongfully accused. Their case involves the Cross-Strait Mutual Legal Assistance Agreement, a backroom deal made between the Ma administration and China. The Taiwan Association for Innocence is currently assisting in review of this case. Dai Wen-qing did not have any legal representation during his court of third instance trial, and while incarcerated at Hualien has become a devout Buddhist and repented for his crimes. Liu Yen-guo was originally sentenced to life in prison; in addition, one of the victims in his case testified that Liu was not the murderer, but this testimony was not accepted by the judge. Furthermore, Deng Guo-liang also originally received a life sentence. This shows that the latter two cases were never crimes serious enough to warrant capital punishment.

All dictatorial regimes use killing to establish their authority; this is true of China, North Korea, and Iran. Justice Minister Luo Ying-shay’s statement that she will carry out the death penalty “when necessary” signifies that she is taking these countries as a role model. Although President Ma has repeatedly boasted to the international community that human rights in Taiwan have achieved international standards, the state violence sanctioned by his administration not only falls way short of international standards, it also shows that his administration will not shy away from using human lives to gain public support. This is a blatant display of the authoritarian tendencies of the KMT regime.

In 2001, then-Justice Minister Chen Ding-nan declared that the government would move to abolish the death penalty, thus launching the beginning for abolition of capital punishment in Taiwan. During President Chen Shui-bian’s second term, Taiwan put all its death penalties on hold between 2006 and 2008. Although President Chen faced numerous political upheavals in his term, he never carried out the death penalty to divert attention or to threaten the people. However, since Ma Ying-jeou decided to resume capital punishment in 2010, each time the death penalty was carried out happened to coincide with political crises in which the Ma administration’s approval ratings plummeted (see appendix). This has caused many citizens to question if Ma is sacrificing human lives to avoid facing the real issues. At this point in time, movements against the backroom Cross-Strait Service Trade Agreement and nuclear power are in full force; as the people fully recognize the phony face of this regime, the Ma administration has decided to play its old tricks again, sacrificing death row inmates to salvage what is left of its legitimacy. In the government’s eyes, the people of Taiwan are mere bloodthirsty spectators at a Roman gladiatorial battle, making a mockery out of the people’s intelligence. When compared with President Chen’s steadfast moratorium on the death penalty, it is more than obvious that Ma Ying-jeou’s government operates on an entirely different level.

The violent crackdown of protestors at the Executive Yuan on March 23 has been recorded on videos and photos all over the internet. These clearly show that the police used illegal violence to deal with protestors, yet the Ma administration claims that they “cannot find any policemen who perpetrated violence”, so that no-one needs to be held responsible for state violence. During the early hours of April 28, the police used metal batons to attack the heads of peaceful protestors, and high-power water cannon were brought in to deal with people staging a peaceful sit-in. Even when the sit-in protestors were surrounded by wave upon wave of police, they still aimed water cannon indiscriminately at specific people. With such state violence perpetrated by the police in blatant disregard of the law, it is no wonder that the people have lost faith in the government. Yet the government has chosen to respond with the ultimate violent act: Taking human lives to show its authority, and hoping that bloodthirsty citizens will embrace the act, so that public attention will be diverted from its many failures.

The dictatorial regime of the KMT has in the past used the death penalty and extrajudicial executions to slaughter its people. The number of people put to death by this regime is far greater than the number of people killed by death row inmates, yet to this day this incarnate of extreme evil still holds supreme command, controls billions of dollars worth of party holdings, and turns a blind eye to the constitution and legal regulations. We must ask: How can such a regime legitimately take a person’s life in the name of justice? In past cases of death sentences wrongfully carried out, such as Jiang Guo-qing, Su Jian-he, Liu Bing-lang and Zhuang Lin-xun, no-one in the government has had to bear any responsibility. We must ask again: How can a system like this have the right to wield an executioner’s axe, and use its blade against its people?

We must also remind Ma Ying-jeou and his administration: Public opinion of an unjust regime will only continue to plummet.

Appendix: A summary of the Ma administration’s use of the death penalty as a diversion tactic

Feb. 2010: At a legislative inquiry session, Wu Yu-sheng demanded the execution of all 44 prisoners on death row at the time.

January and February 2011: Proceedings into the wrongful execution of Jiang Guo-qing were reopened.

Early December 2012: A series of spree killings in Tainan caused widespread apprehension and tension, which was further fueled by a soaring unemployment rate, a staggering economy, and the government’s inability to maintain public safety.