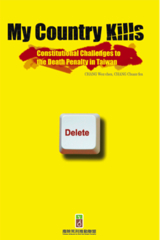 In 2010, with much fanfare, President Ma Ying-jeou, Premier Wu Dun-yih and Minister of Justice Tseng Yung-fu restarted executions to "comply with the law." With the full endorsement of the media, they put four inmates to death. The Constitutional Court, meanwhile, swiftly dismissed applications for judicial review of the death penalty, sacrificing its judicial independence to accommodate the executive branch and media.

In 2007, the Taiwan Alliance to End the Death Penalty assisted dozens of condemned inmates in filing for judicial review at the Constitutional Court. For three years, their application sat untouched. But in May 2010, shortly after the executions, the court dismissed the applications to accommodate the executive's actions. Although it only dismissed the cases, in essence it said that capital punishment did not violate the Constitution. In late March, the Judicial Yuan had also held an unprecedented press conference to state publicly that it was dismissing a separate review of the death penalty. This had clearly paved the road for executions.

In 2010, as the government and media arbitrarily pushed for executions, the debate over the death penalty degenerated into irrational arguing. In truth, it could not even be called an argument: All that was left was an anti-intellectual and populist one-sided discourse on killing, completely uninformed by human rights.

The government responded to the TAEDP's concerns that the death penalty violated the Constitution and the ICCPR with a mentality and discourse reminiscent of the martial law-era. And just as in that era, the media and public opinion sided with the government, attacking the position of abolitionists.

Professor Chang Wen-chen has produced an exhaustive legal analysis of the applications for judicial review, while writer Chang Chuan-fen recounts the events of 2010, weaving in writing from the inmates themselves and revealing the absurdity of the Court's actions. These two articles on the applications and the Court's dismissals and swift endorsement of the death penalty, offer a thorough analysis and critique. Regardless of whether you support or oppose capital punishment, they are worth reading, and in fact both sides of the debate should consider them carefully.

The fundamental reason we advocate abolition is to realize a society without killing. No one may deprive another person of the right to life - including the government. While many say this means protecting the rights of truly bad people, we've never suggested that murderers or "evil" people should not be punished. We only argue that they should not be killed. The fact that many death-row inmates hope to be freed through execution shows that there is a more effective punishment. Many also say that Taiwan is simply not ready for abolition, and are quite content to leave it at that. It is an argument strikingly similar to those who said under martial law that Taiwan couldn't handle democracy. Perhaps, most people in Taiwan are unaware that only 23 countries carried out executions last year - four countries more than the previous year. One of these four was Taiwan. Worldwide, 96 countries have completely abolished capital punishment, while nine have abolished the death penalty for ordinary crimes. Another 34 have not carried out any executions for at least a decade. In total, this means 139 countries have abolished the death penalty in law or in practice.

If Chiang Kuo-ching and Lu Cheng hadn't been put to death, these cases could be remedied. As long as the death penalty exists, there is a risk of wrongful executions. When even one or two executions are wrongful, justice is flawed and the president has to apologize, but an apology can't bring back the dead.